What do climate protection and Internet challenges have in common? To enthuse others, you must yourself be enthusiastic. Anyone who comes across Frank Liebner – be it in his classroom or as part of a teacher training programme – can see his passion for his subject, chemistry. However, for him, the highpoint is not the show effect of an experiment. His goal is to train students to reproduce and analyse scientific phenomena, for themselves, to eventually improve their overall understanding. And for him that means encouraging as many other teachers as possible to hand over the reins in the classroom to the students, so they can make their own discoveries.

The demands and value of student experiments


Many of his colleagues are scared off by what they expect to be the additional effort of deploying digital devices. Do the scale and quality of the knowledge gained by student experiments justify the extra effort? For Frank Liebner, the answer is a definite yes, as long as the experiment is structured appropriately, and the learning targets are clearly and succinctly formulated for the students. At the same time, he understands the concerns of his colleagues, and offers the necessary assistance. For more than 20 years, he has been involved in the T3 teacher network. Scientific research in teaching concepts
He is personally convinced of the value of student experiments but first and foremost of a scientific approach based on empirical processes. For years, Frank Liebner has been cooperating with the Institute for Didactics in Chemistry at the University of Leipzig.

Together with Professor Rebekka Heimann, he has completed a series of studies involving project groups from practically every Federal State in Germany. One of these studies considered the possibilities for overcoming the false ideas acquired by students about the term ions, that have been recognised in relevant literature. Students should independently work out the structure of salts from ions and the causes of the electrical conductivity of aqueous solutions in student experiments using the TI-Nspire™ CX and temperature and conductivity probes. The study confirmed that the use of digital tools can prove a valuable support in the learning process.

The potential of student experiments for knowledge acquisition competence is now beyond question. They are an integral part of the German education standards for chemistry and the other natural science subjects adopted by the KMK on June 18, 2020.

Experimentation is a question of craftmanship
Frank Liebner’s students are now thoroughly convinced: experiments in chemistry are anything but show elements aimed at making the subject less boring. Experimentation is hard work, and their teacher has a strict eye for detail. It starts with the rule that during experiments all students must stand in the classroom, and eating is not allowed. Both rules are essential for improving the supervision of the class and for safety reasons, too. Liebner is obsessed with detail, for example the test tube must be held correctly, and chemicals must be added drop by drop, in the centre of the test tube, rather than being allowed to run down the side. “Experimentation is all about craftsmanship and demands considerable motor skills. Here we not only teach cognitive competences but also handcraft skills. It is in that respect that my subject differs most clearly from most others.”

Heating of the planet and symptoms of freezing
There is a broad consensus about what it is that keeps students interested in the classroom, but what are their interests outside school? For example, climate protection. Some see climate change as an urgent goal while others have their doubts and are looking forward to hotter summers in the future. You can look at it either way. But Frank Liebner believes you cannot. 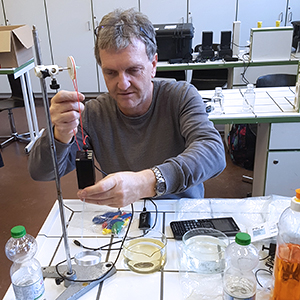 He thinks that if you are truly involved in the subject, you must be able to back your arguments with facts. “Understanding climate change means being able to think in complex terms, and recognise connections,” suggested Frank Liebner, which also gave him the title for his new project. The example of carbon dioxide is indicative for the variety of the processes to be observed. Frank’s goal was to give his students an insight into the necessity of taking a whole raft of factors into account using TI-Nspire™ CX II-T CAS and a variety of sensors, for example to measure the CO2 content. Students were set the task of investigating the solubility of carbon dioxide and how it relates to and depends on temperature, salt content and the movement of water. Frank Liebner was delighted that “the subject was extremely well received. Even the workshops held at our school during the summer holidays proved highly popular.. There were even reports in German newspapers.“

Internet challenges
Most of the students’ leisure time activities are lost from the view of their teachers. Knowing a little more about what keeps them occupied would however be a very good thing. Take for example Internet challenges. People film themselves doing the riskiest activities possible. Pouring a bucket of freezing cold water over yourself may be an unpleasant experience, but not exactly dangerous. The deodorant challenge, however, is a completely different matter: take any deodorant spray and spray it on your skin from a short distance. How could that possibly be dangerous? The deliberate result is to deliver a skin stimulus by wicking heat away from the skin. But the outcome can be drastic. After around 15 seconds, the temperature is reduced to as low as minus 20°C. and the result: a serious freezing injury. Using the TI-Nspire™ CX II-T CAS and a temperature sensor, the effect can be easily illustrated and explained. Frank Liebner came up with the idea following a presentation by Julia Werthmüller, a chemistry teacher who is currently completing a doctoral thesis on the subject of Internet challenges, and their underlying scientific phenomena at the University of Technology in Darmstadt. Together, the pair developed a workshop, which was presented last December at the head teachers conference of MINT-EC-schools. Frank Liebner sees this as confirmation of his ideas. “Anyone who uses sensors to investigate the interplay between a series of different factors and as a consequence is able to reproduce precepts gains a deeper understanding of scientific phenomena, and acquires more ammunition for well-founded arguments.“