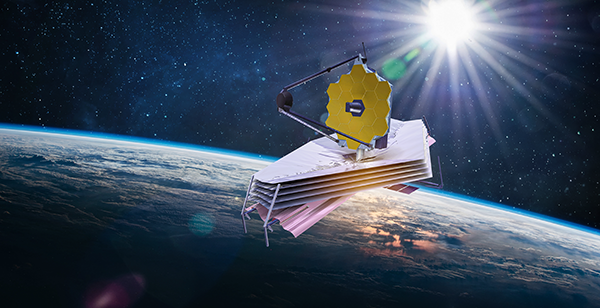 On January 23, 2022, the James Webb Space Telescope reached its destination: Lagrange point 2, some 1.5 million kilometers away. There it can orbit the sun with the same period as the Earth, one year. What is remarkable is that this highly complex instrument is taking advantage of a cosmic location discovered by Euler and Lagrange more than 200 years ago. This is a good opportunity for a classroom activity to calculate the Lagrange points.

Most complex telescope ever launched

The James Webb Space Telescope (JWST) is the most powerful and most complex telescope ever launched into space. Its infrared cameras will be able to observe galaxies which formed shortly after the Big Bang and will need to be protected from the heat of the sun. Therefore, it has been sent to Lagrange point 2, 1.5 million kilometers from the Earth and well beyond the orbit of the moon. Some may feel that exploring space is a waste of resources, but space platforms have provided us with valuable data about our environment and contributed hugely to our understanding of climate change and the ozone layer. There will always be useful spin off from scientific research.

If you as a teacher would like to explain to your students what the Lagrange points are, you might want to check out this idea for a classroom activity. This resource is all about the Lagrange points and why they are important for the JWST. Calculating the positions of these points is difficult but achievable with TI-Nspire™ CX technology.

In the activity, you will find a download for the Lagrange .tns file. This model is an inverse square with one ‘mass’ 100 times the other. Most accounts explaining the origins of the Lagrange points confuse gravitational potential with gravitational force. They also confuse inertial reference frames with rotating reference frames, and some talk about Coriolis forces and centrifugal forces as though they are real forces. School physics syllabuses usually insist that orbital motion is caused by a centripetal force, the force due to gravity, and so use inertial reference frames. Force will be used, rather than energy, to find the position of the two points.

The approach is to consider the way in which the Earth’s gravitational field influences the sun’s field by simply summing the two fields. Only the field on a straight line from the sun through the Earth is considered.