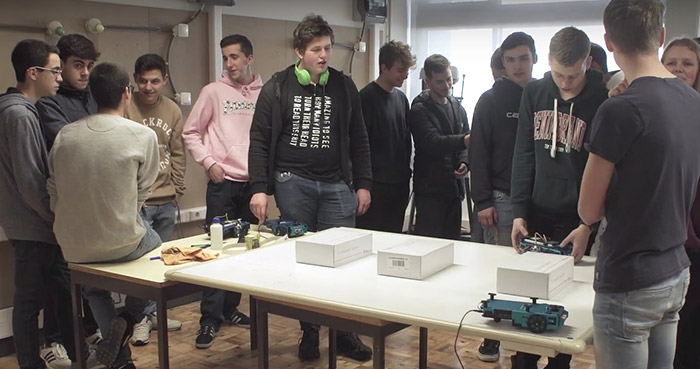 As a participant of the T³ Sharing Inspiration 2017 event, Portuguese teacher Raúl Aparício Gonçalves got inspired by the demonstrations of the robot car Rover. He decided to develop an international project for his students. In 2018, this led to the exchange between 30 students of the Dutch CSG Liudger and Portuguese Ermesinde High School. “It was great to interact with different cultures and school practices,” said one of the students. “This was an interactive project where we shared knowledge.”Parking, Drawing and Detecting Colours

The students worked on assignments with the Rover, like parking while using the distance sensors, drawing and colour detection. “I see many benefits in using the Rover and TI-Innovator™ Hub for these students. They see code becoming real, so maths becomes something physical and real. It was nice to see how proud students were when they got the right results. They gathered around to show other students the outcome,” said Gonçalves. Dutch teacher Bert Wikkerink added: “The students were enthusiastic and experienced that they can quickly use this technology.”

Both schools are part of the TI STEM Lab network. TI STEM Labs, like those of AE Ermesinde and CSG Liudger, work on integrating STEM in the curriculum. Paulo Monteiro, IT teacher of AE Ermesinde stated that, “The benefit of having a STEM team is the exchange of ideas between students and teachers. It increases our students’ development and the development of logical reasoning.” The exchange with the Netherlands led to sharing knowledge and learning from each other at an international level. “We asked the students to form groups consisting of two nationalities and do assignments with the Rover. In that way, the international cooperation was guaranteed,” said Gonçalves.

Challenged to Think Out of the Box

The students indicated that they enjoyed the interaction with a different culture and school practice. And they liked the experiments that challenged them to think out of the box. “I didn’t know that such a small thing could do something so big and that it could be so interesting,” said Portuguese student Gonçalo Nogueira about the Rover. Dutch student Stefan van Teijlingen agreed: “When I first worked with the Rover, I was very enthusiastic. Now we can apply principles that we learned in class in real life and see what happens.” The students found the exchange worth repeating. In addition to working on these experiments and sharing knowledge, they also had a great time together!